Countering UAVs – the Mover of Research in Military Technology

Unmanned aerial vehicles (UAVs) are massively seeping into a wide range of human activities. Along with other remotely controlled or automatic devices, they have entered many aspects of human activities and industry. While the majority of researchers have been working on the construction, deployment and non-military use of UAVs, the protection against UAVs remained on the edge of their interest. Nowadays, the situation is rapidly changing. The risk of misuse of UAVs by criminals, guerrillas or terrorists has compelled authorities, scientists and defence industry to face this threat. Organisations have launched crucial infrastructure defence programs to cope with UAV threat. To solve this problem, it is necessary to develop disciplines improving the air space surveillance and UAVs elimination techniques. The substantial aspects of the UAVs detection and elimination were analysed, being supported by a number of conferences, workshops and journals articles. The contribution of the study in the Counter–UAV area consists particularly in generalisation and evaluation of the main technical issues. The aim of this paper is to emphasise the importance of developing new scientific fields for countering UAVs, and hence it is directed firstly on the scientific audience.

Dr Miroslav Kratky, COL (Retd), Assoc. Prof., PhD, graduated (MSc.) from Military Technical University in Liptovsky Mikulas (Slovakia) in 1979. After serving for 16 year at several positions in the Czechoslovak/Czech Air-Defence Troops (from Platoon Commander, up to the Chief of the Air Defence Missile Troops for combat preparation at division level), he began his academic career at University of Defence in Brno, Czech Republic. He worked as a lecturer, then senior lecturer and, at the end of his military career, he became Head of the Air Defence Systems Department. Currently, he is an academic worker at the above-mentioned department and he is in charge of teaching subjects involving operation and combat GBAD use. His research activities are now focused on the non-standard air threat and air defence in general, particularly ‘C-UAV’ matters. He has written and presented a variety of publications and conference presentations related to this field. He is generally considered a specialist on C-UAV and Air-defence at a national level.

Jan Farlik, Department of Air Defence Systems, Faculty of Military Technology, University of Defence, Brno
Dr Jan Farlik, MSc, PhD graduated (MSc) from Military Academy in Brno (Czech Republic) in 2000. After serving for 7 year at Control Reporting Centre (CRC) of Czech Air Forces (from ID officer to deputy chief of department) he passed the competition for the post of senior lecturer at University of Defence in Brno. From 2012 to 2015 he was Chief of Air Defence Command and Control Section, Department of Air Defence Systems and from 2015 he is the designated chief of this department. He obtained his PhD in the 2012. His research activities are now focused on C2 systems within the Air Forces a C2 procedures modelling. He is still active in the field of practical cooperation with the Czech GBAD troops in sense of military training exercise preparation and evaluation according to NATO standards. 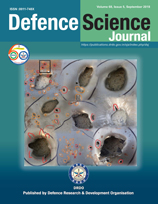